The kick-off meeting of the PADIC project took place on December 1-2 in Järfälla, Sweden.

The European Defence Industrial Development Program project “Passive Acquisition by Digital Convergence” (PADIC) will develop a coastal radar network system with an open architecture; connecting passive, digital sensors of different types. Passive radars use reflections of signals from TV and radio stations, mobile network base stations and added transmitters to detect objects on land, at sea and in the air.

PADIC will study, design, prototype and test a coastal radar network system in response to emerging threats by further developing state-of-the-art sensors that are spectrally non-congesting during peacetime and sustainable and immune against attack attempts during conflicts. The project will make use of low-cost and commercially available technologies and components.

A central problem with ground-based radars is their low life expectancy after conflict onset, since they are easily acquired by radar-detecting sensors, while being considered expensive when used for peace-time operations. Even worse, surging radar costs increases the high-value asset vulnerability, and the resulting sparse deployments leaving gaps for an adversary to exploit during conflict by means of e.g. cruise missiles and UxV drones, and in peacetime by smugglers, insurgents and traffickers using dangerous transportation means.

Accompanied by Patria, Rantelon and CAFA Tech, the PADIC project is coordinated by Saab. The project duration is 36 months (2021-2024). In the first year (2022), Functional Requirements Definition will be established, based on scenario analyses. Moreover, a System Concept and Architecture will be developed. In the second year (2023), the System Design and Developments and System Level Integrations will be done and a prototype will be developed. In the third year (2024), the PADIC system will be tested and demonstrated in Baltic coastal environments. 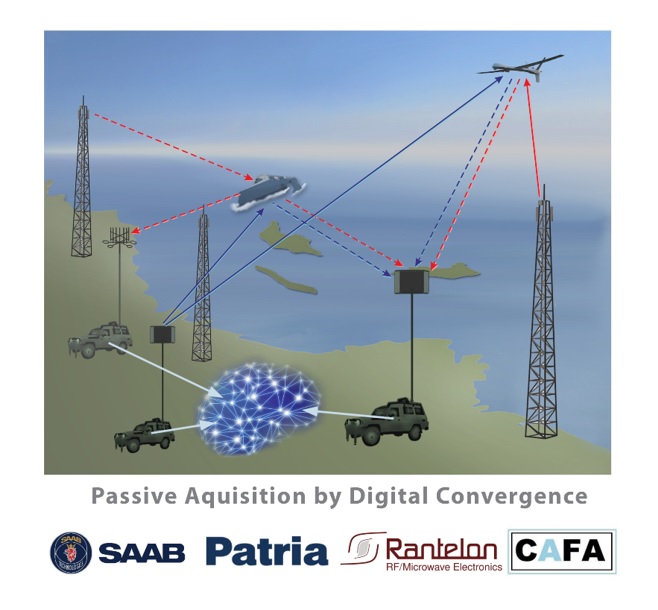 Thomas Lindgren, representative from SAAB and leader for the consortium, stated that the kick-off have been a great success and good opportunity for the PADIC project members to meet and efficiently set-up the project. Saab will contribute with high-tech solutions such as assessment of fully digital innovative antennas, combined with software defined functions using functionally transparent hardware platforms.

Mikko Viitaniemi, VP Sales & Marketing from Patria states that this is a great European opening and a new compelling milestone for PCL technology-based passive radar development. Patria is looking forward to the cooperation within PADIC team and confident that MUSCL passive radar offers performance and numerous features to form a solid, scalable and cost-efficient baseline for the PADIC system.

Karl Taklaja, CEO of Rantelon, stated that the PADIC project on a multi-static passive radar system is a trustworthy platform and regional gateway for the cooperation of SMEs within the leading North-European high-tech electronic industry.  The development of radar wideband receiver module is the most critical of Rantelon’s tasks within radar hardware manufacturing.

Tanel Järvet, CEO of CAFA Tech, said that considering Estonia’s long coastline, the PADIC system has a good perspective to support Estonia’s coastal defence and border guard. CAFA Tech is contributing to the PADIC project’s sensor data analytics with Artificial and Convolutional Neural Networks to analyse the huge amount of data collected by passive radars in near real-time (under 1 sec).

About SAAB
SAAB (Sweden) is a leading defence and security company with an enduring mission: to help nations keep their people and society safe. Empowered by its 18,000 talented people, Saab constantly pushes the boundaries of technology to create a safer, more sustainable and more equitable world. Saab designs, manufactures and maintains advanced systems in aeronautics, weapons, command and control, sensors and underwater systems. Saab is headquartered in Sweden. It has major operations all over the world and is part of the domestic defence capability of several nations.

About PATRIA
Patria (Finland) is an international provider of defence, security and aviation life cycle support services as well as pilot training and technology solutions. Patria provides its aerospace and military customers with equipment availability, continuous performance development as well as selected intelligence, surveillance and management system products and services. Patria’s mission is to give its customers confidence in all conditions, and the vision is to be the No. 1 partner for critical operations on land, sea and air. Patria has several locations including Finland, Sweden, Norway, Belgium, Estonia and Spain. Patria employs 3,000 professionals. Patria is owned by the State of Finland (50.1%) and Norwegian Kongsberg Defence & Aerospace AS (49.9%). Patria owns 50% of Norwegian Nammo, and together these three companies form a leading Nordic defence partnership.

About RANTELON
Rantelon (Estonia) designs, develops and manufactures innovative electronic systems with in-house capabilities in electronics, software, mechanics and radio technology. During its 26 years of operations, Rantelon has become a company with a workforce of almost 60 employees whose level of quality of work has won the company the trust of many established clients from the civil, security and industrial sectors.

CAFA2021-12-21T19:19:14+00:00
We use cookies on our website to give you the most relevant experience by remembering your preferences and repeat visits. By clicking “Accept”, you consent to the use of ALL the cookies.
Cookie settingsACCEPT
Manage consent